The most noticeable thing about hoverflies, syrphid flies, flower flies, or whatever you might be inclined to call them, is their across the board resemblance to various types of bees and wasps. It’s a nice example of evolution at work; critters which happened to evolve traits making them appear more dangerous than they really are have survived and thrived, inhabiting every continent of the world except for Antarctica. This type of mimicry is termed Batesian mimicry, where a harmless species evolves to imitate the warning signals of a harmful species in order to deter predators.

To the keen eye of an attentive human, they are easily distinguished from bees and wasps, most noticeably by their short and stubby antennae and the fact that they only have two wings, as opposed to the two pairs of wings common to (most) bees and wasps.

According to the source of all regurgitated information (Wikipedia [citation needed]), most hoverflies are distinguished from other flies by a spurious (false) vein, located parallel to the fourth longitudinal wing vein. This is “a longitudinal thickening resembling a true vein or nervure and situated in the membrane of the wing of a fly between the radius and media” [1].

There are some 6000 species of hoverflies across the world, many of which look incredibly similar. I haven’t been able to identify the exact species of each type shown here, so if you can help with that, please leave a comment!

One nice surprise from these images is that I appear to have found a pregnant female, with eggs visible through the translucent side of her abdomen!

View more images below or check out the full size gallery!

The spurious vein of a hoverfly I’m no entomologist; report mistakes or help with identification by leaving a comment or using the contact page. 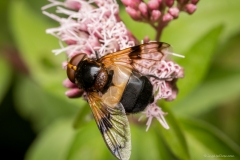 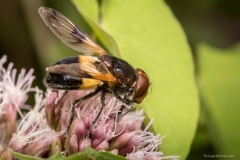 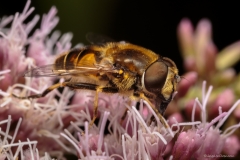 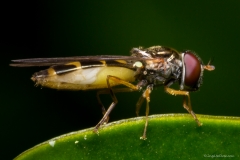 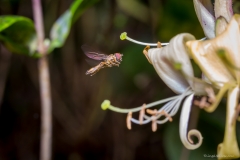 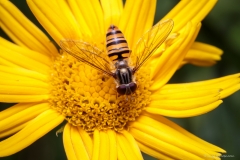 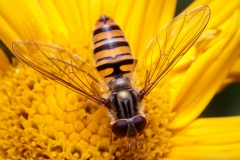 This entry was posted in Flies and tagged fly, Mimic, Syrphid.